A dozen years ago, there were around 15 low-lying islands with nesting colonies of Louisiana’s state bird. But today, only about six islands in southeastern Louisiana harbor brown pelican nests — the rest have disappeared underwater. “Louisiana is rapidly losing land,” said Slaton, a researcher at the University of Louisiana at Lafayette. “Subsidence and sea level rise are a double whammy.”

Sliding off the side of her small boat, seabird biologist Bonnie Slaton wades through waist-high water, brown pelicans soaring overhead, until she reaches the shores of Raccoon Island, AP reports.

During seabird breeding season, the place is a raucous symphony of noise and motion — and one of the few remaining refuges for the iconic pelicans.

The crescent-shaped island is the final sliver of land separating Louisiana from the Gulf of Mexico — a natural speed bump against storms that roll in from the sea. An hour’s boat ride from the mainland, the barrier island’s remoteness allows birds to nest on mangroves and sandy beaches a safe distance from most predators.

A dozen years ago, there were around 15 low-lying islands with nesting colonies of Louisiana’s state bird. But today, only about six islands in southeastern Louisiana harbor brown pelican nests — the rest have disappeared underwater.

“Louisiana is rapidly losing land,” said Slaton, a researcher at the University of Louisiana at Lafayette. “Subsidence and sea level rise are a double whammy.”

The vanishing islands threaten one of the last century’s most celebrated conservation success stories — the decades-long effort to bring the pelicans back from the edge of extinction.

On land, brown pelicans are clumsy-looking birds, their huge beaks and wings lending them what Slaton calls a “goofy” air. But soaring low over the ocean, their wingtips skimming the water, pelicans are streamlined and majestic.

The same forces swallowing up these coastal islands are also causing southern Louisiana’s saltwater marshes to disappear faster than anywhere else in the country. Scientists estimate Louisiana loses one football field worth of ground every 60 to 90 minutes. 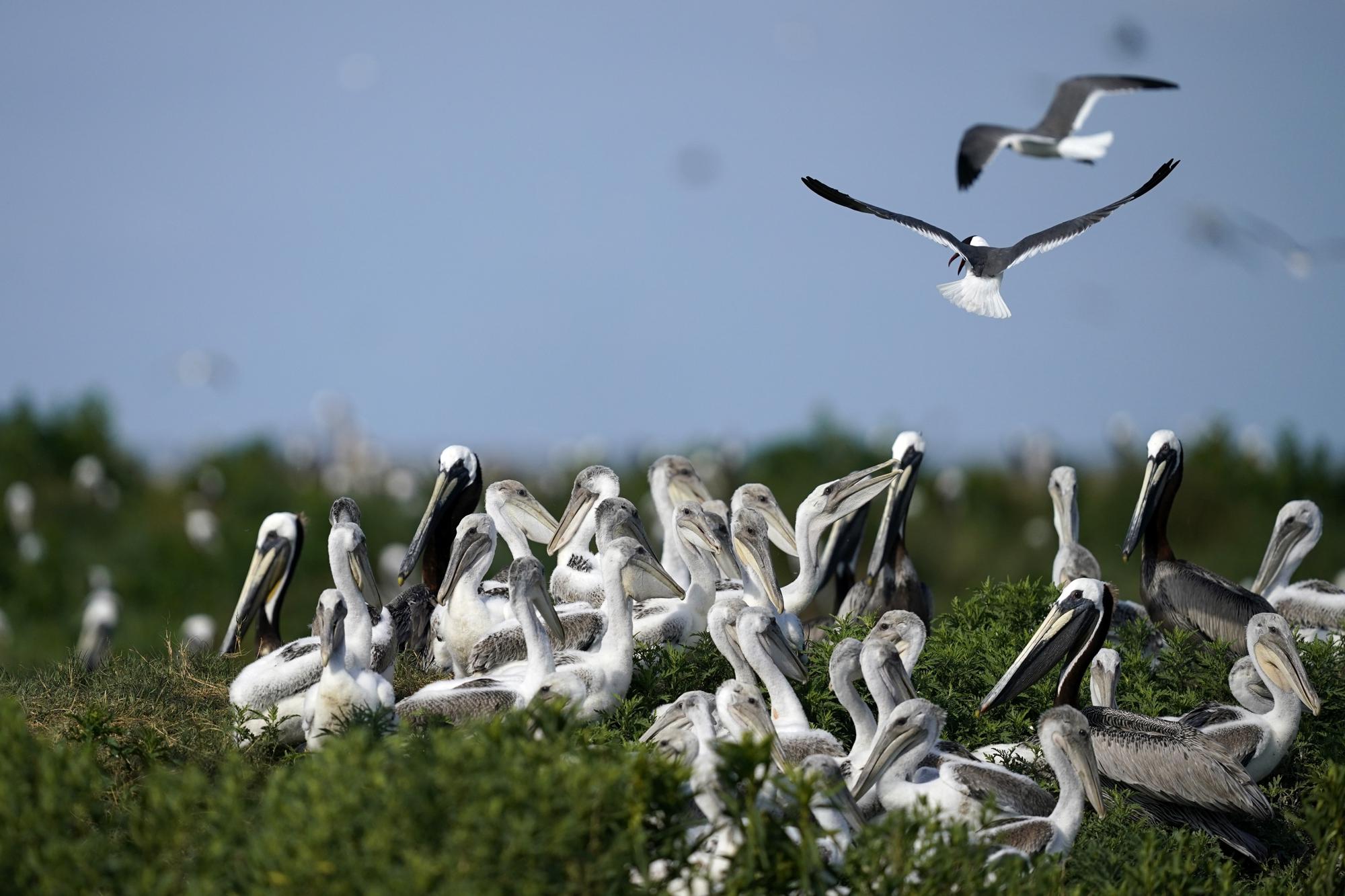 Visiting a seabird colony is like entering the hustle and bustle of a busy city, with neighborhoods of birds loosely grouped by species — pelicans, terns, egrets, spoonbills and gulls, all ferrying meals to chicks.

As Slaton and two other biologists walk along Raccoon Island’s shoreline, the birds alight. The swirling, swooping cacophony of feathered life announces the intruders. The calls of a thousand laughing gulls are loud enough to drown out human thought.

As Slaton treks sand dunes to change out batteries and memory cards for 10 trail cameras on poles, her T-shirt becomes speckled in white bird droppings.

The motion-activated cameras are set up to observe pelican nests in varied habitats. Some of the circular nests of smooth cordgrass are built atop mangrove stands, others on grassy hillocks. 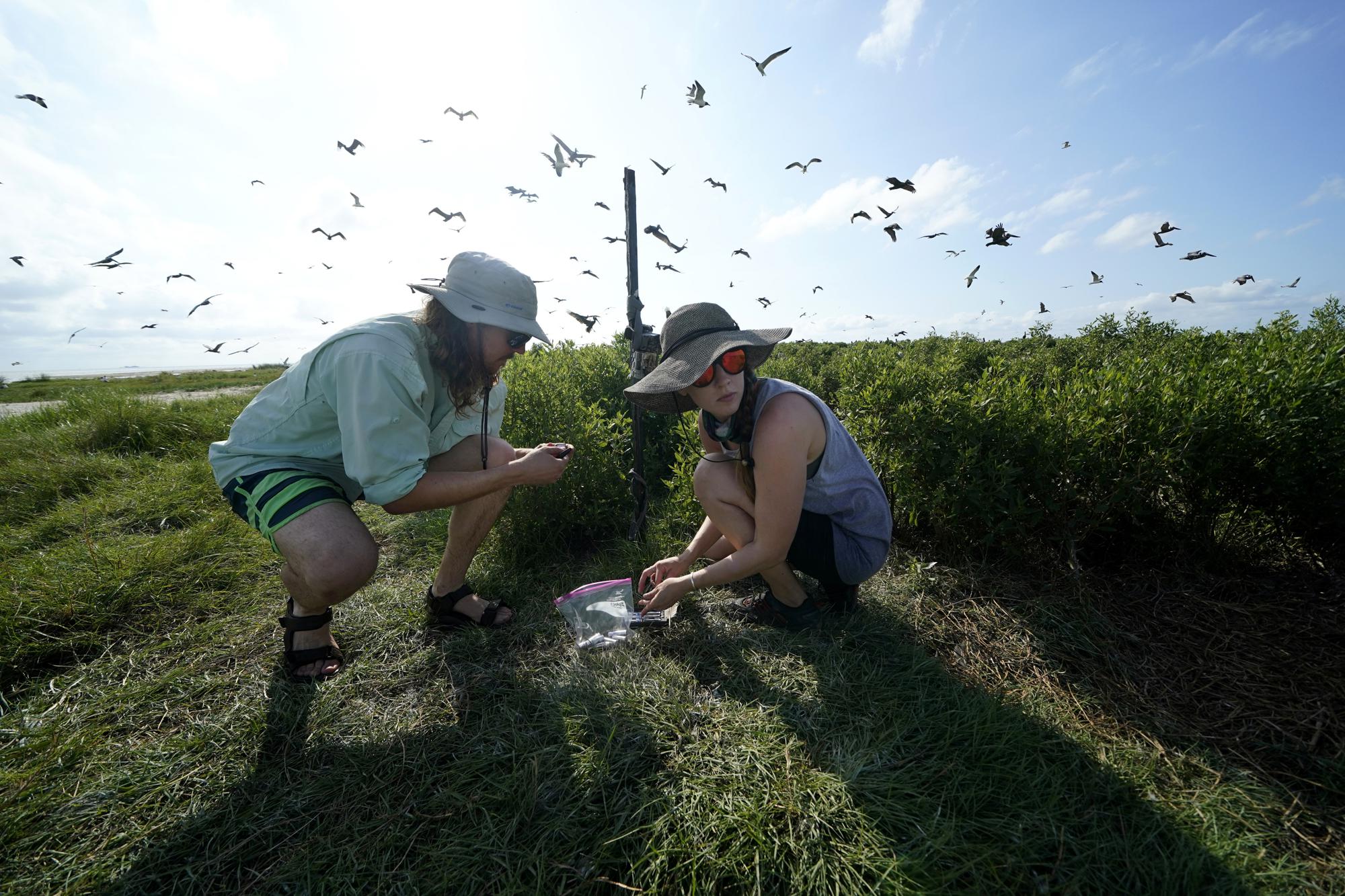 The early birds snatch up mangrove penthouses, where nests have a better chance of surviving storms, Slaton explains. “The late nesters are on the ground, which is riskier.”

Camera data has shown that in recent years the main threat is flooding — which can wash away entire nests, as happened in April 2021.

Within a week, chicks are covered in downy white and gray feathers. When parents are off the nest, the older chicks stand guard, swaying and hissing at perceived threats. 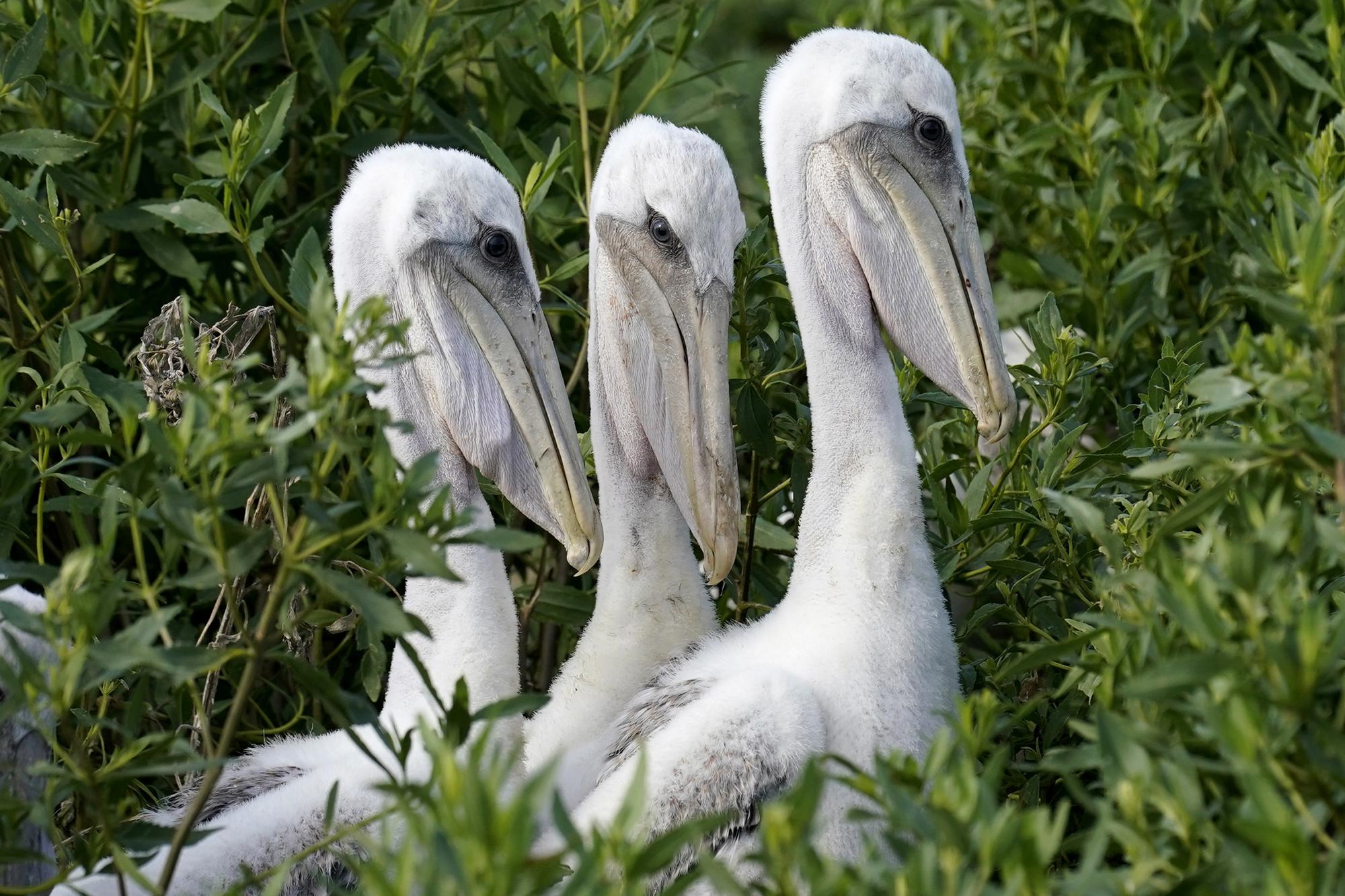 Watching a seabird colony reveals at once the promise and fragility of new life. Then suddenly the biologists are wiping white dribbles from their foreheads again.

They don’t resent the aerial assaults. After all, the copious bird droppings act as natural fertilizer that helps shrubs and grass grow from the island’s sand and stones. Their roots slow erosion.

Without seabirds, the land would disappear much faster.

When Mike Carloss was a child in Louisiana in the 1960s, he never saw brown pelicans.

The large coastal birds were among the first species declared endangered in the U.S. in 1970. Like bald eagles, their populations had been decimated by widespread DDT pesticide use, which thinned eggshells and prevented healthy chicks from hatching.

The beloved pelicans were completely gone from Louisiana, where their likeness remained only on the state flag. But a long-running effort to bring them back led to one of the country’s most inspiring comeback stories.

After the U.S. DDT ban in 1972, biologists brought pelican chicks from Florida to repopulate empty islands across the Gulf of Mexico. More than 1,200 were released in southeastern Louisiana over 13 years. 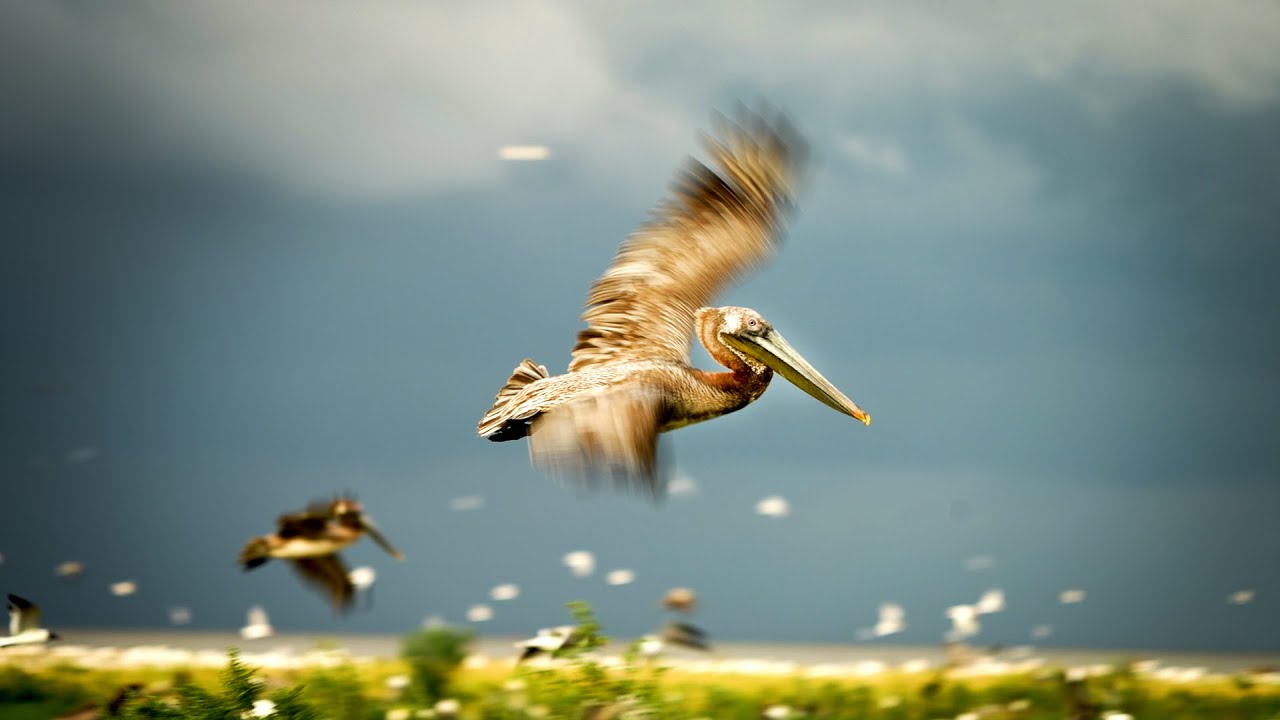 WATCH: The future of the brown pelican (AP Video/Shelby Lum)

One location was Raccoon Island, where Carloss, then a teenage field assistant at the Louisiana Department of Wildlife and Fisheries, remembers tossing fish from the beach to feed chicks, as a sort of surrogate parent.

“I babysat these young pelicans out on a remote island,” he recalled. “Somebody had to hand-feed them essentially.”

As a state wildlife biologist for more than two decades, Carloss later oversaw multiple restoration projects on the island. But now he fears that if islands keep disappearing, “we would be back to the days of the sixties, and not because of poisoning.”

Today one side of Raccoon Island is ringed by granite breakwaters that divert tides. Sand has been pumped in to refill small lagoons beginning to form.

Erosion is a natural process, and over the course of thousands of years, most barrier islands rise and fall. Unlike volcanic islands, there is no bedrock, only layers of silt washed down the Mississippi Delta.

Barrier islands, as environmental historian Jack Davis once wrote, “are impermanent, precarious places, at the mercy of wind and washing water – making, shaping and destroying them.”

But rising seas and increased storm frequency and intensity linked to climate change accelerate the pace. And the islands have been starved of new sediment from the Mississippi because the river’s course has been controlled since the 1940s with levees to prevent flooding and aid shipping. 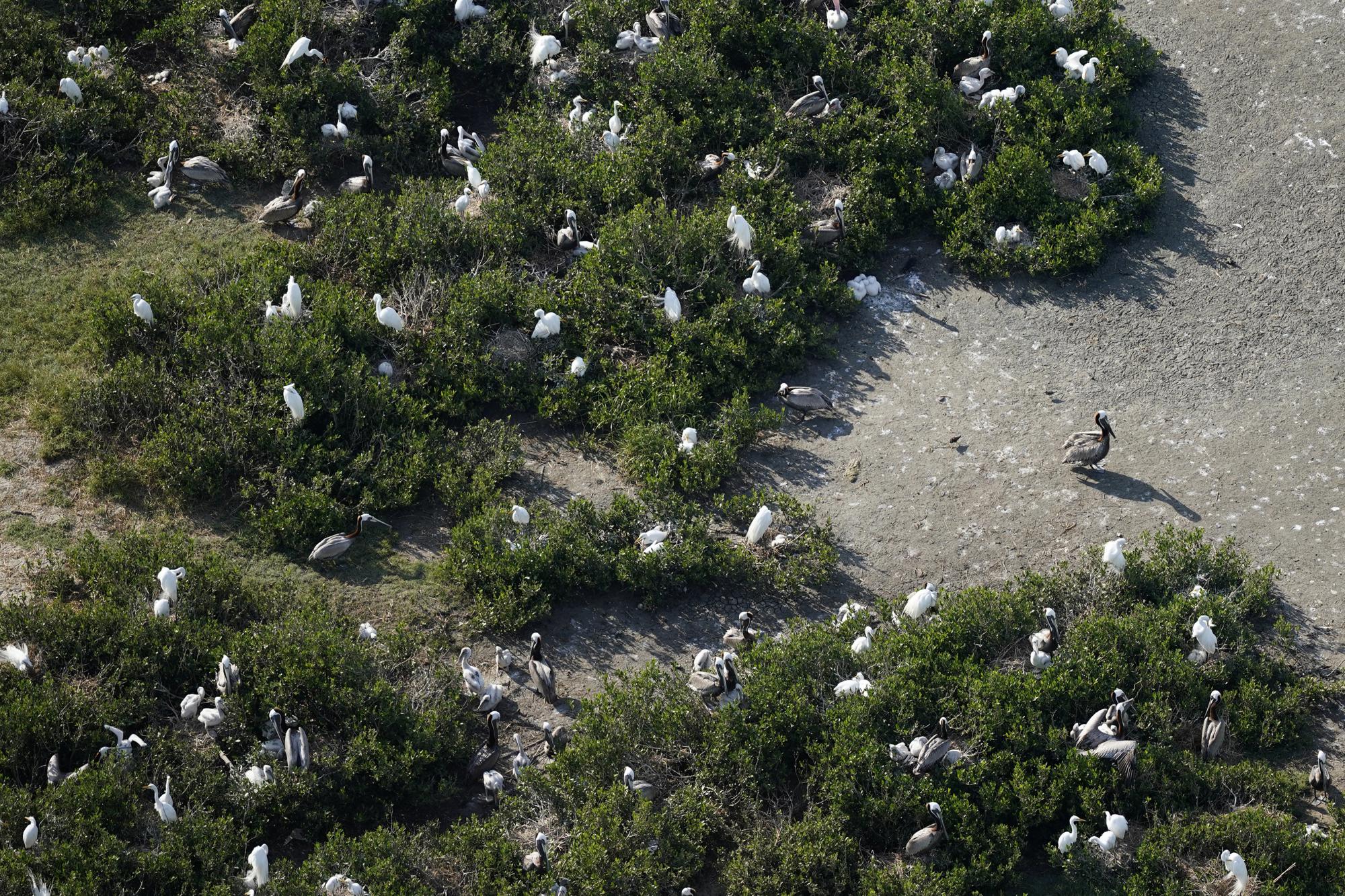 Nesting pelicans are seen from the air on Raccoon Island. (AP Photo/Gerald Herbert) 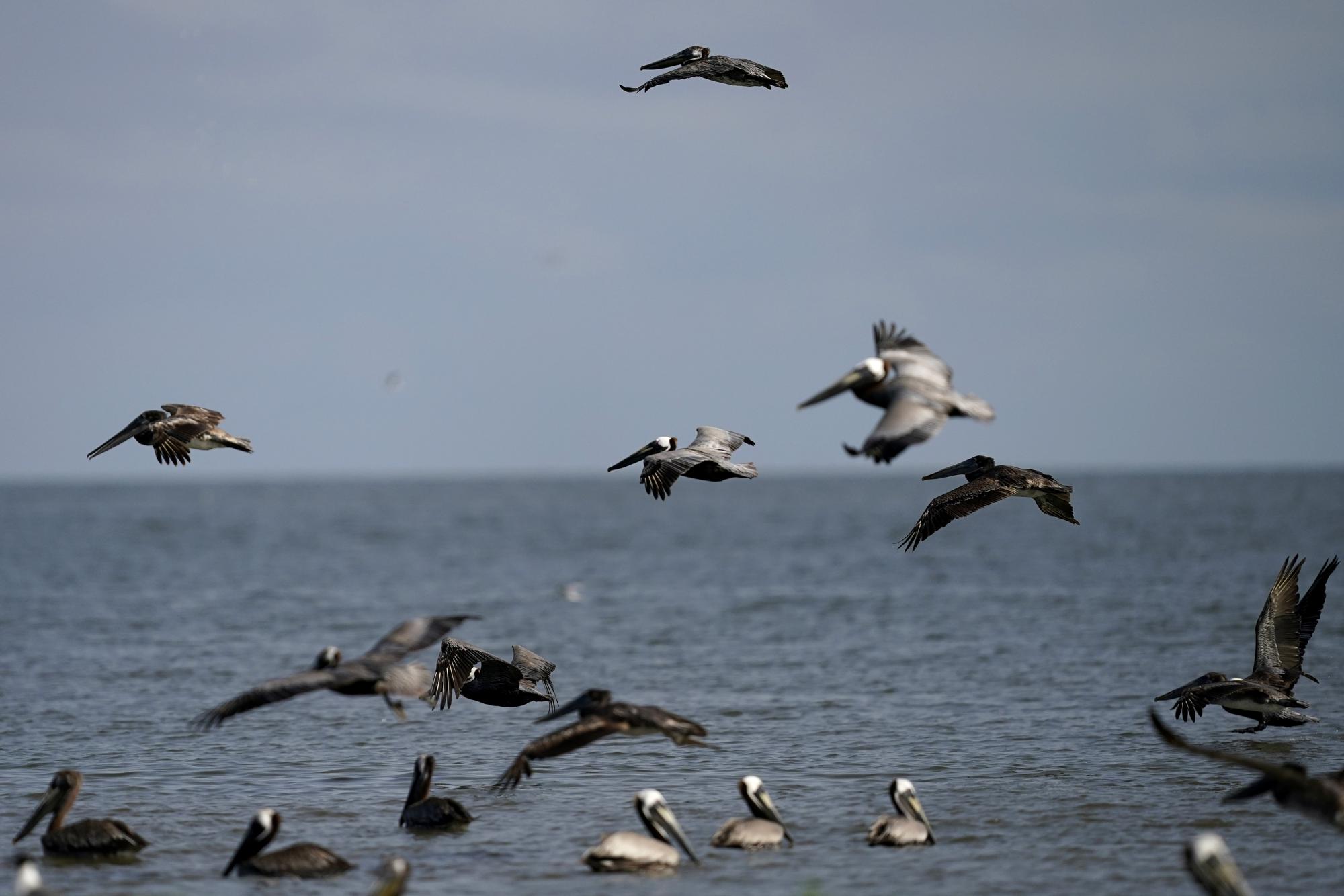 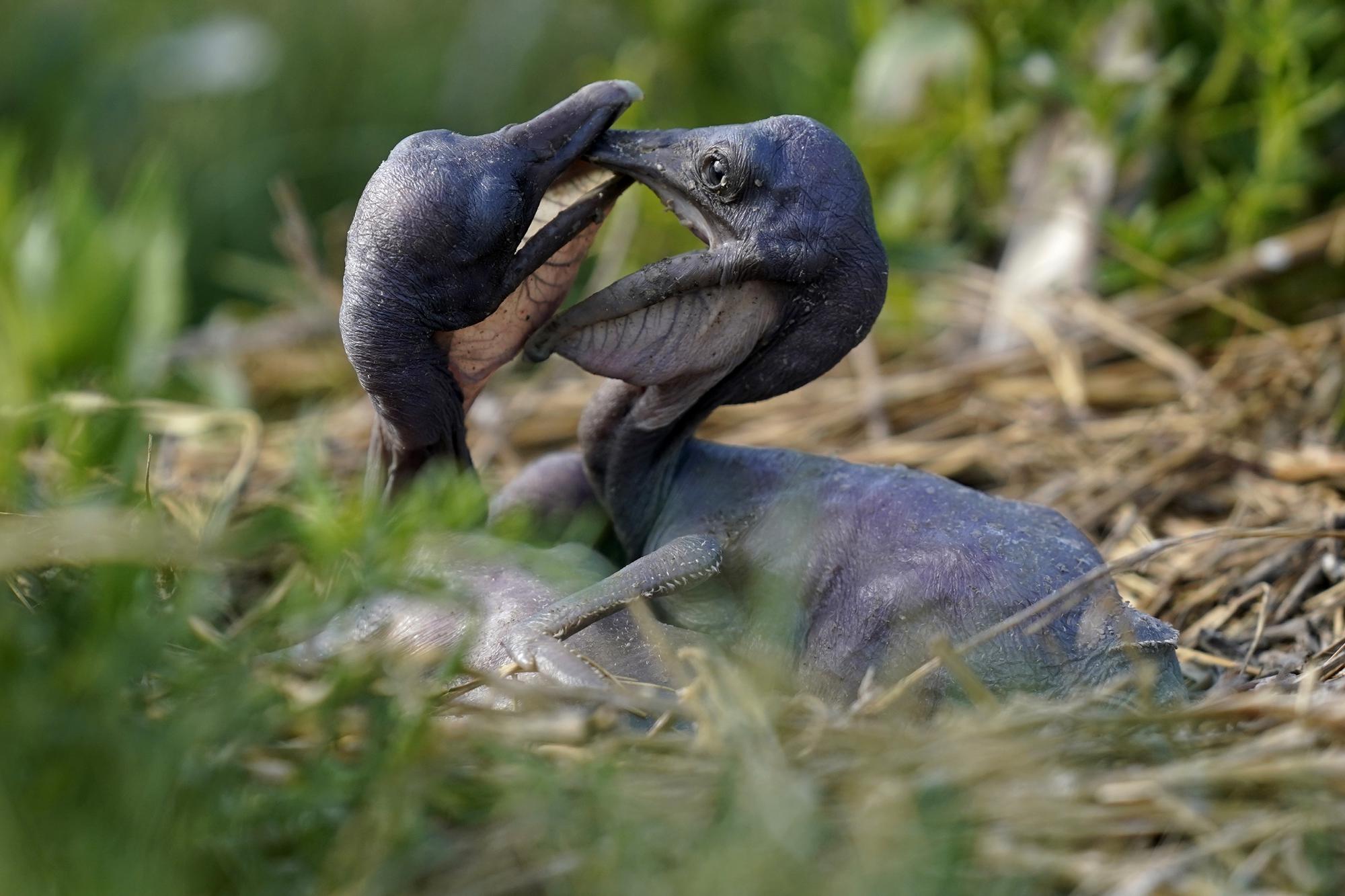 “That stops sediment from reaching areas that are fast sinking,” said Jaap Nienhuis, who studies erosion at Utrecht University in the Netherlands and previously conducted research in Louisiana. “Coastal Louisiana is losing land at perhaps the highest rate in the world.”

Every few years, government agencies undertake work to restore and maintain some of the barrier islands, an unending labor. The money comes, for now, from a legal settlement after the 2010 Deepwater Horizon oil spill that killed hundreds of thousands of marine animals.

But it won’t last forever — and many sinking islands aren’t restored at all.

On another day, the biologists steer their aluminum boat past an unrestored island called Philo Brice. Mangroves grow on low inundated land, and pelicans nest in the upper branches, chicks craning as parents land with meals of fish.

It’s still a decent breeding habitat, as long as the soil holds and plants remain above water. “In five or 10 years, it may or may not be here. It’s that rapid,” said Slaton.

Flying in a small plane at 500 feet (152 meters), low enough to see the heads of pelicans poking from mangroves, the difference between Raccoon Island and unrestored Philo Brice is stark: One is solid land, the other like soft bread dissolving in a soup of blue.

When the biologist Juita Martinez conducted research in coastal Louisiana between 2018 and 2021, she found the number of pelicans on another unrestored and flooded island, Felicity, dropped from 500 to about 20.

“In the last decade or two, we’ve lost so many pelican nesting sites,” she said.

Brown pelicans can live more than 20 years, and in long-lived seabirds the impact of breeding troubles takes time to become clear.

For now, pelicans are still common in coastal Louisiana, and their likenesses are everywhere — license plates, mugs, T-shirts, restaurant signs and university seals.

The brown pelican “is a symbol of Louisiana, just like the eagle is a symbol of America,” said Rue McNeil, executive director of the Northlake Nature Center in Mandeville, Louisiana. “It was put on the state flag because that particular bird represents a lot of strength.”

And “sacrifice,” she added.

WATCH: Pelicans are a symbol of Louisiana. (AP Video/Shelby Lum)

The disappearing islands aren’t only a problem for the birds.

One recent afternoon, Theresa Dardar calls out to neighbors as she and her husband Donald take their small boat down the Pointe-au-Chien Bayou in southeastern Louisiana.

Everyone knows everyone here in the close-knit community of the Pointe-au-Chien Indian Tribe. But their world is fast changing.

“This bayou, I used to ride down it with my grandfather. I could reach out and pull the grass on the land on either side of the boat,” Dardar recalls. “But look how wide the water is now — all that land is gone.”

The boat passes a single white cross on a low bank — marking one of the tribe’s eight cemeteries on the bayou. The community is worried that rising seas and storm waves will wash away their ancestors, memories and culture.

Dardar supports efforts to restore the islands. “I’m glad that they’re doing that for the pelicans, but also they need to do it for the humans as well,” she said.